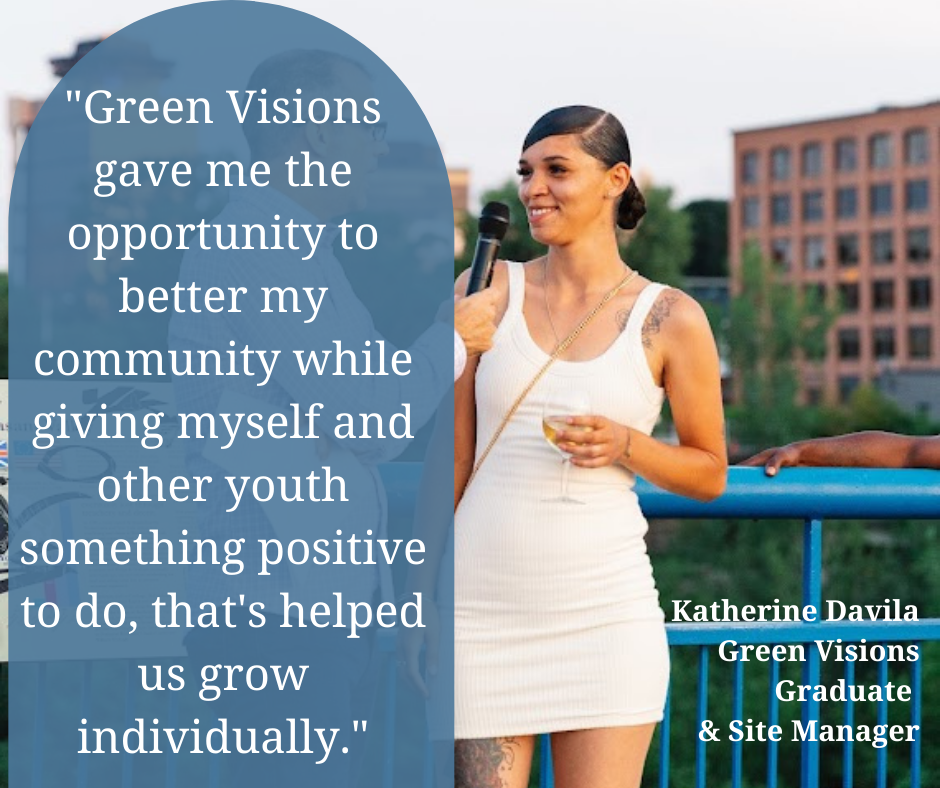 Kat was recruited to interview for the Green Visions program on a typical neighborhood-canvassing day, back in 2015, simply standing outside of a JOSANA corner store. As an 18 year-old, city resident with open availability and a need for work experience, Katherine represented a prototypical Green Visions candidate. She interviewed that same week and was pretty much hired on the spot. She even dragged two friends to the open interviews that day.

Because of the flexible and supportive, part-time programmatic structure of Green Visions’, Kat was encouraged to work towards her High School diploma from All City High School, while participating fully in the 2015 program.  She earned her diploma, graduating on time that June.

That summer, through Green Visions, Kat received extensive training in teamwork and customer service as she took on a leadership role at the garden and in the sale of Green Visions’ flowers at the Rochester Public Market, where program participants also manage the market’s Veggie Valet Service. This experience instilled confidence in her to apply, interview for and secure a sales position at a local wireless phone retailer that summer as well. Kat was able to complete the Green Visions program in its entirety, and smoothly transition into this job.

Katherine’s first sales job eventually led to her next position as a full-time sales associate at Sutherland Global.

Green Visions’ staff provides year-round support for program graduates. In-person meetings and check-ins are scheduled to track graduates’ progress and continue to guide their advancement. In the spring of 2016, Kat expressed a desire for new opportunity and experience in management, to advance her resume. Green Visions was able to use its network of cooperative partners to successfully identify an opportunity for Kat with the Genesee Land Trust, where she interviewed for and earned the position of Assistant Manager for their Summer Landscaper Apprentice Program.

Katherine assisted the program director in managing a team of 10 youth (ages 14-15) on a daily basis for the duration of the summer.  The primary skill set needed for the assistant is the ability to motivate youth while providing direction. Katherine was able to lean on her experience with Green Visions to relay horticultural techniques as well as teamwork skills. Kat thrived.

Because of her now expanded resume, Katherine had the experience necessary to apply and interview for a Direct Support Assistant at the Finger Lakes Developmental Disabilities Service Office, a position she holds to this day.

In 2020, Katherine was recruited once again by Green Visions, this time to be a Site Manager, and program mentor. Katherine serves in this role to this day, while also maintaining her job with Finger Lakes Developmental Disabilities Service Office.

Kat is a shining example of how the Green Visions program works to support, enable and propel our participants and graduates into sustainable success. Kat has grown by leaps and bounds, from a part time student to a driven young entrepreneur with a full-time job, full benefits and a robust resume for endless potential. Beyond that, Kat is a leader, and a true asset to our team and to the Rochester community.

When you think of Green Visions’, don’t just think of our fields of flowers, also know that our gardens are grounds for growth.